Monday's Musings: Are you Between a Rock and a Hard Place? 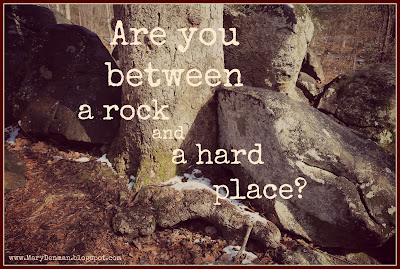 You've probably heard the expression, between a rock and a hard place.

Well, I saw a tree between a rock and a hard place. Namely, another rock!

It was a sight to behold.

It started me thinking.

How in the world did a tree grow between those rocks and the barrenness around it? 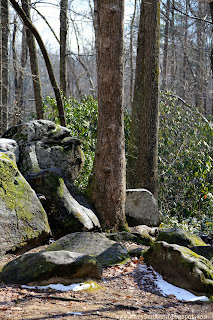 As I looked up, I saw how tall the tree had grown.

Looking back down, I saw that some roots hugged the exposed earth and became part of the landscape.

Other roots had to go down deep.

Not only did the tree grow, but seemed to flourish in an inhospitable place.

First of all, I believe the tree had tenacity. When it began to grow, there couldn't have been much soft soil, or light in that crevice.

But it started. And kept going.

As it grew, it encountered the rocks around it.

How do I know?

The tree grew right up to the rocks, then over them. You can see where it almost looks like the rocks are part of the tree.

This tree didn't let the harsh conditions define it or stop it.

This tree overcame being in between a rock and a hard place. 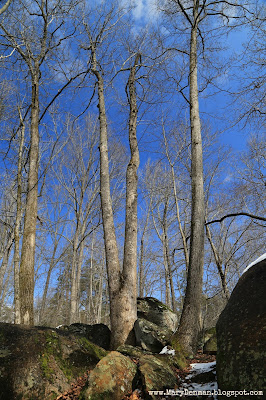 To prove it could be done.

To let the adversity shape it for the better.

Isn't that true in our lives too?

I know that when I see someone who's overcome great odds or adversity, I admire them.

I'm inspired by them. It gives me hope that I can overcome as well.

But overcoming isn't the only thing I admire.

I think another secret to overcoming difficult odds is not wallowing in the trial.

Now I didn't say that we don't struggle. That tree struggled in lean times to get enough water and nutrients. And it did. 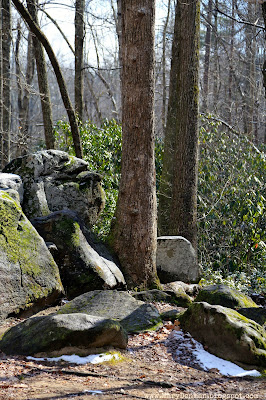 But wallowing in the trial means we kind of give up and feel sorry for ourselves. We can act like a martyr (which isn't fun for those around us!)

That's not inspiring to anyone....except other martyrs maybe.

It's what we do with the struggle that is so important.

We may have strong and difficult emotions that accompany our struggles and trail.

I've been there. I buried my mom and father-in-law 2 weeks apart. Two weeks before my daughter's wedding. (Yes, 2 funerals and a wedding in 4 weeks.....) Then I had a major shoulder surgery....I cried until I thought I couldn't cry another tear.

Yet, here I am. Because I didn't just give up. I had someone to talk to, to help me deal with the grief and loss. I had other friends who listened when I needed. I tried to walk with others in their hard times. I prayed. A LOT. I saw God provide for me. And eventually, I got stronger and stronger.

I'd like to think I've risen above the rock and the hard place. 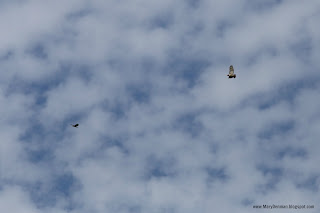 Now I wouldn't wish 2 deaths that close together on anyone. But because of that, I'm in a position to encourage others that if God could get me through that, he could get them through.

To encourage you that he can get you through the rock and the hard place.

And maybe, as a result, we'll be a beautiful example to others of what God can do.

And we can grow a little taller. A little closer to the sky and clouds above. And rise above that rock and hard place.

How have you been inspired by other people overcoming difficulties?
What have you learned from being in between a rock and a hard place?

Blogs I join! You should visit them!

Email ThisBlogThis!Share to TwitterShare to FacebookShare to Pinterest
Labels: Between a rock and a hard place, inspiration, Mary Denman Photography