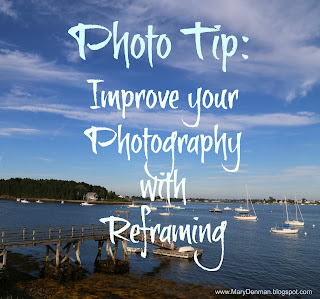 Today, I want to teach you a simple, yet obvious technique to improve your photography.

When I tell you what it is, you may roll your eyes.

But stay with me.

Here it is: Take more than one picture of a scene.

Don't throw tomatoes at me just yet. :)

Let me explain and give you some examples!


Often, our initial reaction is to just shoot a picture and move on. Sometimes, we get it right in that first shot. But often, we try for something and the picture we get isn't quite what we wanted.

If you're only taking one shot and moving on, you may be disappointed later, when you view your pictures on a bigger screen at home.

One technique for changing up a shot is to use both horizontal and vertical (Landscape and Portrait) orientations. Here is Part 1. Here is Part 2.

But for today, I want you to learn to reframe the same scene, standing in the same place and see what you can come up with.

In PHOTO 1, the central focus is the pier, with the rocks in the foreground and lots of water as well.

But I noticed how beautiful the sky was.

So, in PHOTO 2, I shifted the camera up. This moved the pier to the bottom of the picture and allowed me to capture the beautiful blue sky and lacy clouds.


Is one better than the other? Not necessarily. They're just a different take on the same scene.

Let's move to another set of photos.

In PHOTO 3, I wanted to get the feel of Casco Bay, Maine at low tide. The sun was beginning to set and made the boats bright white.


In PHOTO 4, staying in the same location, I reframed the shot to include far more clouds and sky. I did this by using a wide angle.
Sometimes though, you may take a shot that doesn't look as good as you remembered. Or, it didn't turn out the way you wanted.

After taking the two shots above, I decided to add the green of the vegetation to the next shot which produced PHOTO 5. I didn't care for the result very much. The darkness of the shade on the grass and rock in the lower left hand detracted from the overall shot. But I kept it to show you not all of my pictures turn out.
In a case like this, you can crop the photo later to make it be more pleasing.

Here's PHOTO 6, the cropped version. (Post on cropping here)
So, what is the big TIP here?

When taking photos, especially landscapes, frame and reframe your shots. That means: take a couple of shots of your subject that encompass different elements.

ASSIGNMENT: Grab your camera and try this out. Go outside and find something to photograph and then stay in the same spot and see what else you can include in the photo to make it different.

BLOGGERS & WRITERS: If you look at photos 1 & 2, the emphasis of them are very different. Even though the pier is in each of them, the feel of the pictures isn't the same. By changing the way you frame your words, you can change the emphasis or direction of your blog or your writing.

TWEETABLE: Improve your Photography with Reframing